My Impersonation Story
Last week, I was introducing Twitter to an elementary campus.  As teachers searched my name to follow me, one asked, "Which one do I follow? There are two." Like any teacher would, I walked over to check it out. Yes, indeed.  Someone had taken my profile picture, description and full name to create another twitter account just like mine.  My handle @kbalbier, my imposter's handle @bkalbier.  At first, I was creeped out and worried that they would spam and direct message people that follow me.  :( 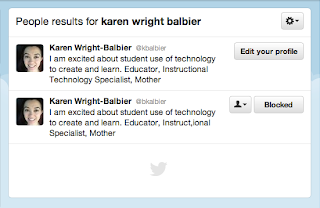 Checking it Out
Here are the results that appeared when I searched my name this morning. You'll notice the handles are slightly different and the second profile has a comma in the middle of the word instructional.

I'm still not sure why someone would create a double version of me.  I wonder if that person makes a few bucks for creating people and having them follow others.  Who knows.

I spent a little time checking out my impostor's profile page.  This morning it was following two.  One of the profiles it is following is @certain_kq. It looked like most of the followers of @certain_kq were impersonated too.  Then I found that @certain_kq was an impersonated version of @certain.  It seems like a big twisted web of fake twitter accounts.  After I searched the impostor again tonight, it is now following 21 people.

What to Do
Don't panic.  This could happen to anyone.  If this happens to you, I would inform your Twitter Followers.  Read up on the impersonation policies that Twitter has in place and make sure to report the impersonation to Twitter's Help.

Then What
I reported the impersonation.  Twitter Support emailed back.  I was asked to fax a copy of my State Issued ID to verify that I am the real me.  I sent off the fax this morning.  Now, I'm waiting for Twitter to send a confirmation.  I hope this account will be deleted soon.

Lesson Learned
I will make it a routine to search my name on Google and Twitter more often.  I will also read more than a profile description before deciding to follow others.

This is not going to deter me from seeing the bigger picture.  Sharing the good that is happening in the world of education, my experiences, and making connections with other educators are all things that are meaningful to me.  There may be a copy of my face and profile, following random people and tweeting nonsense.  That profile will have 0 impact on the world of education.  It will be a meaningless Twitter Account.  I, on the other hand, have bigger plans for the real me.

Email ThisBlogThis!Share to TwitterShare to FacebookShare to Pinterest
Labels: My Thoughts, Social Networking

Taking Time to Blog with my Daughter 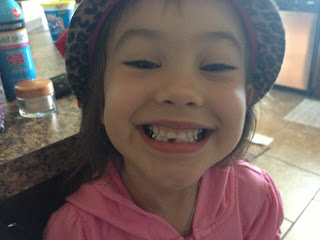 I have seen what students can do with technology.  What is a mother to do when opportunities to create with technology are not all over your child's classroom? I begin to sprinkle it in to spend time with her and share with her teacher.

My daughter does not attend a school that I work with.  I'd like to keep it that way.  I don't want to be a helicopter parent. When she was 4, she would passionately talk about wanting to go to "Spanish school."  She would tell me she wanted to speak Spanish.  I sought out a public dual language school that could help make her dream happen. :)

In the back of my mind, I wondered what my little girl would create. I wondered if she would use the computer.  I wondered what she would learn.  I also knew I was not her classroom teacher.  Nope, I have a "one up."  I'm her Mother, her first, and most important teacher and role model.

After her first day of Kinder, we created a Blog together.  It was also my project to begin blogging myself.  I also wanted to have a portfolio of my daughter's learning.  We didn't do much with it last year and we are starting all over again. :)

This year, we decided it was time to give it another shot.  We worked on a project together.  When we were finished, we sent an email to her teacher to share her work.  Friday, I received a message back.  Her teacher played the Puppet Pals video we created and posted on her blog for her class.

Last night, before she went to bed, I showed her that she had 587 blog views (in the history of her blog).  She smiled very big and asked, "Does everyone like it?"  Then, she repeated, "587."

She's my daughter and student.  I love her and am going to help her be a 21 Century Learner.  Check out her blog, Kaylee Shares, and leave her a comment.

As an Instructional Technology Specialist, I work with 9 schools, K-12.  I make many classroom visits to work with teachers and students.  Many teachers introduce me to their class as a tech guru or as a person who is really good with technology. Maybe it's because I am always willing to help them with technology and when they attend sessions with me, technology is always involved.  Those are fine introductions.  It is always nice to be introduced to a classroom of excited students.

The best introduction I received was when I visited a 3rd grade classroom.  The teacher turned to her students and said, "Class, this is Mrs. Balbier.  She is my teacher." She went on to explain that she was attending my classes while they were at P.E. to learn all about iPads and the SMARTBoard for them.

Email ThisBlogThis!Share to TwitterShare to FacebookShare to Pinterest
Labels: My Thoughts

Twitter, why did it take me so long to get you?

I knew about Twitter.  I knew many high school students used it as their primary social networking tool. I knew my boss expected me to tweet.

Why did it take me so long to understand the most powerful learning tool, Twitter? After all, I have been sprinkling my love and excitement for teaching, technology, and learning, with a smile for as long as I can remember.  What I need to remember is, there was nothing wrong with what I was doing. What I see now is, I was only sharing with the people that see me face to face or get my emails.  They are the people I trust and work with.  I know that I have only debated and had conversations with groups of educators that will still like me tomorrow, if I don't agree with them.

I feel that it is important to let you know that I have had a Twitter account since 2011.  I would only use Twitter when I attended a conference, like TCEA to tweet what I was learning.  I didn't add to my PLN by collecting people to follow.  When I would return home, I felt like I was tweeting myself and no one could possibly be reading what I was tweeting.  Do teachers tweet in El Paso?

I have been a faithful Twitter user for 4 months now.  Faithful, meaning that I am using it to learn, share, and make connections now.  I no longer feel like I'm tweeting myself.  How did this happen?

1.  Ask for Twitter Handles- During the last conference I attended, PodStock 2013, I didn't want to lose the connections I made.  Every time I had a conversation with someone, I asked for their twitter handle.  They usually asked for mine back and I gained a few new followers.  I wasn't tweeting myself anymore.

2. Build Relationships- This has been the most difficult for me.  Try to interact, answer questions that you know the answer to, send a compliment if you honestly notice they are sharing things that are valuable to you, retweet any message that you want others who are following you to read.

3. Discover hashtags #- I didn't worry about hashtags too much when I began tweeting.  I have since learned that it makes it easier to search and following topics.  As I read other tweets, I am paying attention to what hashtags they are using.  As I tweet, I am trying to add hashtags to share with others who are interested in that topic.

4. Explore- Use the search feature in Twitter.  Search for people, topics, keywords, places, book titles, or anything you feel like learning or reading about.  After searching names of people I work under, I have discovered that I am not the only person that didn't get twitter.  There are a lot of people in education, making huge decisions, that do not have an account.  We all have to start somewhere, right?

5. Learn- Take learning into your own hands.  Every story and how is different.  Here is one story that started my twitter learning adventure.  I saw a conversation someone was having with @TechNinjaTodd.  I think I started following him because I liked his twitter handle.  I found that I am learning a lot from him and his twitter friends.  He shared, @EduAllStarsHQ podcast.  I later found that he is also a host with two other amazing educators.  As I listened to the podcasts, I started following all of the guests.  Then I found that other educators I made connections with at other conferences knew @TechNinjaTodd via twitter.  It's a small Twitter world.  I could keep going.  Since then I have been on a learning overload.  Learning through twitter because I want to, is very different than someone telling me I have to read a book and discuss it at work.  I am learning what I want to learn, when I want to learn it.  How powerful is that?

I feel like I can sprinkle my excitement for education, learning and technology with people I know now.  I don't really know them, but I'll be working on the relationships.  Since twitter only allows for 140 characters, I know blogging is going to have to be another way I share.

Here's to my rebirth of learning and sharing.  I will be sharing Twitter with a campus on Tuesday.  I'll be happy to share your twitter advice.  I don't want it to take them 2 years to get it.